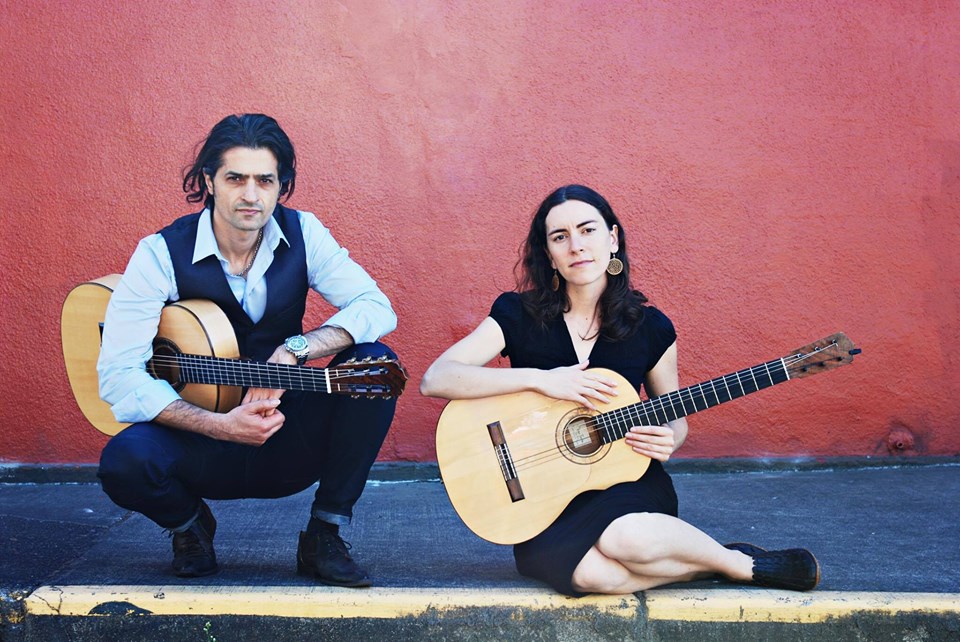 SEDA
Mehdi Farjami – flamenco guitar
Brenna McDonald – flamenco guitar, vocals
Nick Hutch – percussion
Pepe Raphael – vocals
Seda – Translates Silk in Spanish and Sound in Farsi. This is the beginning of a new start of former founder and guitarist of Toque Libre Mehdi Farjami. In collaboration with flamenco guitarist and dancer Brenna McDonald, they started this project in March 2015. Combining the traditional flamenco, latin, and afro cuban music they collaborated and found chemistry in working together with the common goal to be true to flamenco rhythms and latin grooves. The journey has just begun and they hope to start combining other instruments such as Cajon, Bass along with flamenco dancers to the music.
Mehdi started playing guitar at the age 15 and was inspired by the rock sounds and guitar players of the 70’s, 80’s, and 90’s. By the late 90’s he fell in love with the pure sounds of flamenco guitar and from that point on kept discovering the latin world and flamenco sounds of Spain. By 2004 he found mentor Dale Fine and started studying Flamenco. After studying for 5 years, he felt ready to begin a new chapter. He started the group Toque Libre and eventually moved on to approach more of a flamenco sound, which meant collaboration with the talented flamenco guitarist and dancer Brenna McDonald. Together they showcase sounds of Flamenco, Latin and even Argentinian Tango.